If you have landed on this site looking for a particular blog then please check the listing below. If it is not a recent one then go to the appropriate page above to view past blogs as per the area of interest it covers. Hope you enjoy the read.

What is this Fuzz about Wind Farms ? 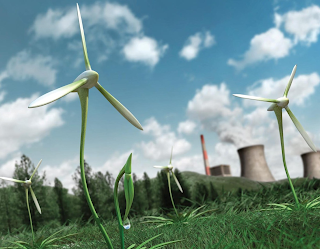 After an embarrassing 'speedy' exit of Chris Huhne, some 100 MP's from his own coalition is trying for an equally speedy exit of his much supported subsidies for onshore wind farms. But what is the fuzz all about? What are these 100 MP's worried about? Would all this help or hurt the common man? These are some of the questions that my next door granny asked me. So, I thought of writing a "wind farm fuzz for dummies" blog. It very important to be aware as it is we dummies - the common man - who has to suffer the consequences. Yes, I did use the word 'suffer', because as it looks, whatever be the outcome of the political jugglery , the uncrowned, foolishly misled, consumer kings i.e. us, are going to face the brunt.
For those who just cannot connect the relation between the two words "wind" and "farm".A Wind Farm is a large area of land or water where a group of wind turbines are erected to generate electricity.The ones on land are called onshore and those in large rivers and seas are called offshore wind farms. A wind turbine is a huge vertical fan which rotates when wind blows on it and this rotation turns a turbine inside which generates electricity. For all those who are interested to learn further visit these links > Wind Farms <> Wind Turbines < (Source: Wikipedia)
Q: So what has the government to do with Wind Farms?
A: As we all know energy is the key commodity for any nations growth. With the continuous depletion of current sources of energy like fossil fuels, the cost of energy has been sky rocketing, a hard fact that all of us are very aware of, thanks to the constant upward price changes by our energy companies. Thus it's very important to find alternative energy sources to meet the energy demands of the future and to stabilise the energy prices. Otherwise it's predicted by visionaries that the next big war and unrest will be for energy. Also all of us has heard about climate change issues, the biggest threat to mankind's sustainability on this planet. To tackle this evil, government all over the world are spending huge amounts of tax payers money on projects that will help to reduce the damage that we have done so far. This is why renewable energy is such a hot alternative energy source. Renewable energy is energy which comes from naturally replenished resources such as sunlight, wind, rain, tides, and geothermal heat. If we are able to do this then we have a source of energy which is clean and which is available in large quantity and for ever. Thus it will tackle all our energy related problems and will drive us to an era where it will be clean, cheap and in abundance. If you want to know more about renewable energy you can visit the link > Renewable Energy < (Source: Wikipedia)

To support the development of such green energy, governments provide subsidies to companies involved in generation of electricity using renewable energy.In UK the subsidies are given in form of Renewable Obligations Certificate (ROC) payments. This is the money that the Wind Farm owners get in addition to the profits that they make by selling the electricity. Now this money that the government pays has to come from the consumers. The Department of Energy and Climate Change (DECC) has stated that these subsidies adds up around £26 to every household's energy bills and this will go up to £50 by2016.

So the MP's rejection to these subsidies looks justified? Let's first see what are the reasons they have provided in their letter to the PM.
You can view the full letter here > MP's letter to PM < (Source: The Telegraph)

What surprised me is the fact that the letter mentions only subsidies to onshore wind farms as an inefficient way of spending tax payers money. The truth is that the subsidies for onshore as well as offshore wind farms are almost the same. Then the only logical reasoning is that the onshore farms are being targeted more because of it's noise, visual and space impact on the peoples staying locally. It can be inferred then, that the MP's main reason for objections is to support the local people who want to fight against certain wind farm owners. Clearly playing out vote bank politics rather than being genuinly concerned about the tax payers money. Nor are they worried about the impact on the poor man's energy bills, which is what every pro-petitioner has been basing their argument on.

Q: So is onshore wind farm really bad?
A: Government legislation requires that 10% of electricity supply must come from renewable sources. UK being one of the windiest country in western Europe, wind power is the most cost effective option to meet these legislative goals. Around 4000 additional modern wind turbines are all that would be needed to deliver 10% of the UK's electricity, roughly 2,500 onshore and 1,500 offshore. Also regarding the efficiency and reliability of Wind farms, there are certain myths and facts that I would like to clarify:

1. Myth: Wind farms are inefficient and only work 30% of the time .
Fact: A modern wind turbine produces electricity 70-85% of the time, but it generates different outputs depending on the wind speed. Over the course of a year, it will typically generate about 30% of the theoretical maximum output. This is known as its load factor. The load factor of conventional power stations is on average 50%. A modern wind turbine will generate enough to meet the electricity demands of more than a thousand homes over the course of a year. An with more funding and research the design and engineering of these turbines will only evolve to be more efficient.

2. Myth: Wind farms are ugly and unpopular
Fact: When the first sky scrappers of the world were constructed, they were termed as ugly and unaesthetic. But as their necessity couldn't be avoided for the sustenance of our city, they became accepted and with evolution of design and architecture, they are now marvelled for their aesthetic appeals. Similarly structures like wind turbines wont be an eyesore for the next generation as it will evolve further by then in every sense. However, even in current times, studies regularly show that most people find turbines an interesting feature of the landscape. On average 80% of the public support wind energy, less than 10% are against it, with the remainder undecided. Surveys conducted since the early 1990's across the country near existing wind farms have consistently found that most people are in favour of wind energy , with support increasing among those living closer to the wind farms.

3. Myth: Wind farms kill birds
Fact: The RSPB stated in its 2004 information leaflet Wind farms and birds, that "in the UK, we have not so far witnessed any major adverse effects on birds associated with wind farms". Wind farms are always subject to an Environmental Impact Assessment and BWEA members follow the industry's Best Practise Guidelines and work closely with organisations such as English Nature and the RSPB to ensure that wind farm design and layout does not interfere with sensitive species or wildlife designated sites. Rather, a recent report published in the journal Nature confirmed that the greatest threat to bird populations in the UK is climate change.

4. Myth: Wind farms are dangerous to humans
Fact: Wind energy is a benign technology with no associated emissions, harmful pollutants or waste products. In over 25 years of its existence around the world, no member of the public has ever been harmed by the normal operation of wind turbines. In response to recent unscientific accusations that wind turbines emit infra sound and cause associated health problems, Dr Geoff Leventhall, Consultant in Noise Vibration and Acoustics and author of the Defra Report on Low Frequency Noise and its Effects, says: "I can state quite categorically that there is no significant infra sound from current designs of wind turbines. To say that there is an infra sound problem is one of the hares which objectors to wind farms like to run. There will not be any effects from infra sound from the turbines."

5. Myth: Wind farms are noisy
Fact: The evolution of wind farm technology over the past decade has rendered mechanical noise from turbines almost undetectable with the main sound being the aerodynamic swoosh of the blades passing the tower. There are strict guidelines on wind turbines and noise emissions to ensure the protection of residential amenity. Further, there are research happening to improve on the design of the blades in order to minimise the swoosh sound further. With continuous research even these noises will be a think of past for our future generation. All we need to do is be patient and give time which is true for any great technology that we currently vouch on. For these technology to evolve it is imperative for the local government to support the companies and research institutions involved and removal of subsidies is equivalent to killing the industry instantaneously and shun the great benefits that it would have provided in the future.

Also the DECC's statement on how subsidies are affecting the energy bill is not relevant here as in the letter the ministers have stated that the savings from not subsidising wind energy should be distributed to other renewable energy. Thus effectively the burden on the average British household energy bills are not going to change.

In the light of these facts, I find cutting down of the £ 500 million a year subsidies to the wind industry is turning a blind eye on our best renewable energy resource. It's effects will surely bring insecurity into the energy future of this country. And all this for some cheap political mileages.
A more realistic approach will be to cut the subsidies in phases and re-direct it to the research institutions working on the wind technology, ensuring that the technology evolves, the turbines become more efficient and our future generation gets a chance to live in a clean, green and energy affluent nation.

Good One Pradeep ... I have always liked your style of writing ...

You have mentioned that the turbines adds feature to the landscape ... yeah mate bring up the next one.